I made a Rescatux tour which might be interesting to be in the first place.

Each of one of the Rescatux options in this article will have a link to their video so please check them too.

Super Grub Disk was a tool for fixing GRUB1 (version 0.9X) or booting into your  system and it’s deprecated. You can still find its downloads although they are a bit hidden in Super Grub Disk page. 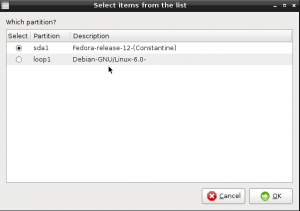 The old chntpasswd program has been hacked so that you can use it from a GUI. You can just select your Windows drive and the user you want its password to be reset.

You shouldn’t forget that Super Grub2 Disk is also included in Rescatux.

Please check the Rescatux wiki for USB instructions. For the cdrom you can just burn it like any other live cd. Imgburn for Windows and Brasero for Gnu/Linux should help you. Make sure you burn it as an image not as a file.